A group of Markham high school students are helping to carve out a future of respect, wisdom and truth in the city while showcasing their artistic talents.

In a partnership between Markham and the York District School Board, six Grade 12 students from Unionville High School are carving eight 10-foot thrones made from fallen trees. They’re working under the guidance of Shane Clodd, head of the school’s visual arts department. 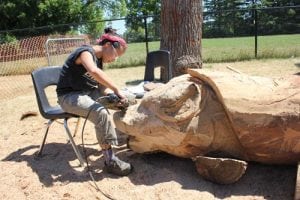 Once complete, the thrones will be placed in each of the city’s eight wards for residents and visitors to enjoy. Seven of the thrones will represent the Seven Indigenous Grandfather Teachings of respect, love, courage, honesty, wisdom, humility and truth. The eighth throne pays homage to the Indigenous clan system of governance and will be erected in Ward 2, where Markham Civic Centre is located.

“We took our inspiration from Markham’s history, governance, environment and Indigenous teachings,” says Clodd. “Our hope is that these works will reaffirm Markham’s dedication to exploring and sharing Indigenous culture, while promoting a healthy community.”

The students began carving the fallen trees, which were recovered from city parks, on July 9 with guidance from Indigenous consulting artist Donald Chrétien. They’ll continue carving until August. 17.

“The Markham Thrones project represents the City of Markham’s commitment to truth and reconciliation,” says Mayor Frank Scarpitti. “Markham residents will soon have eight beautiful pieces of art throughout our city, where communities can come to visit and reflect.”

In 2017, Markham signed an agreement of cultural collaboration with Eabametoong First Nation, also known as Fort Hope. Most recently, the city celebrated the official opening of the Aaniin Community Centre and Library. Aaniin (pronounced ah-nee) means hello or welcome in Ojibway. The community centre invites diverse peoples of all backgrounds to collaborate, share knowledge and celebrate Indigenous traditions and values.